As we all know, the Earth’s illumination is not consistent throughout the year. It depends on our planet’s axial tilt in relation to its orbital axis as well as the Earth’s rotation. The Tropic of Capricorn (23°26′22″) is one of the most important geographic locations, with the Sun turning around above it once a year on its apparent journey across the sky. This makes it easy to determine the astronomical seasons. Precisely on December 22nd, the Sun reaches the Tropic of Capricorn on the southern hemisphere and perpendicularly casts its longest southward rays. It is the day when the astronomical winter starts in the North, whereas in the South the astronomical Summer, and the areas beyond the Antarctic Circle are going through a polar day.

Namibia is among the ten lucky countries in the world where, just 200 km south of the town of Swakopmund, the Tropic of Capricorn runs through. It is a very popular spot among tourists who on their way through the Namibian desert to the depopulated town of Solitaire, wish to take a picture with the sign saying “The Tropic of Capricorn”, which stands alone in the middle of the Namibian desert. And even though the fauna and flora are not exactly the richest around these parts, sometimes there’s a chance to notice a kudu or an oryx far away on the horizon as it marches freely through the desert sands on a hot day.

Nearly 50 km south of the Tropic of Capricorn, when sticking to the route C14, it is not hard to miss the unusual town of Solitaire. Founded in 1948, Solitaire is just one gas station, two tiny hotels, a small church, several residential buildings and the McGregor bakery, which serves the visitors delicious fresh sandwiches, cold drinks and the best apple pie I have ever had (not including my mom’s ). It is a perfect place to rest for the shade seeking travelers who often enamored with the town’s atmosphere, decide to stick around for a little more than one day. 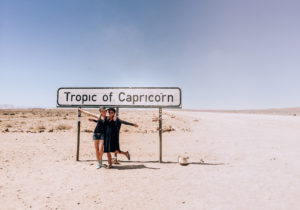 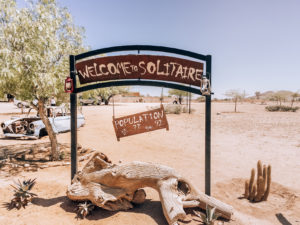 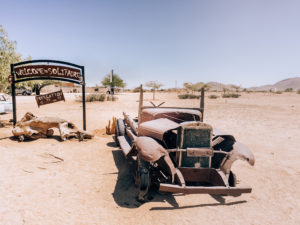 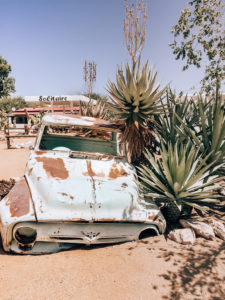 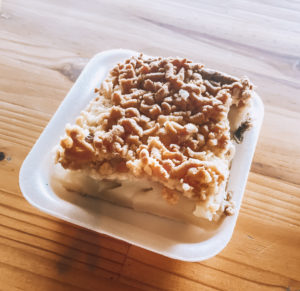